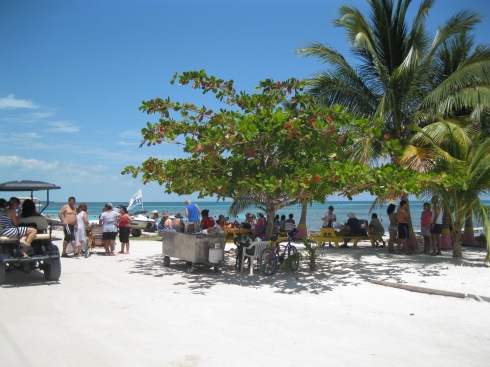 Easter Weekend at “The Split”

This is the last blog based on my first-person account of our 2013 Belizean adventure, encompassing our two month vacation in Belize from February through March and the first of April. I decided to re-post parts 1-6 because I thought they needed to be edited and because I was able to add on -the-spot pictures which I wasn’t able to do in the first instance.

And also because I wanted a blog-break over the summer season, my favourite time in Ontario, Canada when we raise rabbits, laying hens, meat birds, turkeys and ducks in our hobby-barn and plant and harvest a wide-assortment of vegetables and nurture our peach and pear trees, raspberry, current and thimble-berry bushes until they can be picked, plucked, canned and turned into jam.

The newly posted blogs have been very well received. Thank you, whoever (and wherever) you are. Do not hesitate to comment on my blogs. I like it very much when viewers make comments. 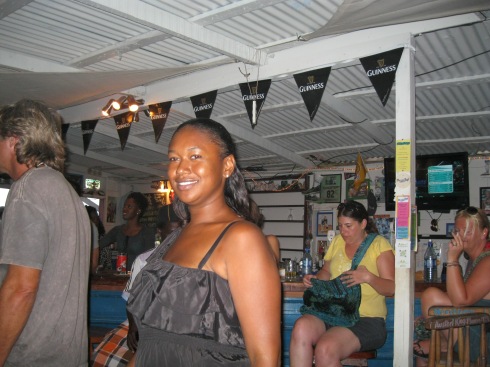 Host with the Most

So come with me now, back to Caye Caulker, a little island off the coast of Belize, where we have been languishing for the past couple weeks…

All is calm on Caye Caulker. Our daughter, Rhiannon, her partner, Andrew and our granddaughter, Clea, have flown the coop and are back in Toronto facing the vicissitudes of city life in the winter. Alas.

We are left alone again, forced to face one another across the table on the front verandah of our 2nd story cabana on a sub-tropical island in the Caribbean. I read the Toronto Star on my Asus tablet. She’s doing something but I don’t look up. We grunt monosyllables at one another, each of us wondering how much more of this we can endure. Black grackles the size of vultures soar ominously overhead…

We chat with Luciana and Michael, two truly busy people who don’t have much time for chit-chat but alway make time.

We exchange greetings with other guests as they come and go through the gates of the Oasi; we talk with Oasi staff, the gals who clean our room every day and the guy who sweep the grounds clean; we talk to street vendors, shop keepers and tourists and travelers we meet at restaurants and at the ‘split’, our favourite swimming place on Caye Caulker.

This season the weather has been less predictable than years past, more inclined to days of hot, hot weather tempered by cold fronts from the north when you have to wear long-sleeved shirts or even a jacket till mid-day and at night tuck yourself in bed with a wooly blanket. Today is one of those days, so we skip our daily swim at the split and stroll along the main drag looking for presents to bring home.

We still frequently use the gas barbecue available for guests and often eat our supper under the palapa set in the midst of the bushes, plants and flowers that adorn the front yard.

As my birthday approaches, we decide not to have a birthday bash for me. Since our family has gone home, we will go low-key and less labour intensive. Over supper one night, I mention ”Chinese take-out”” as an alternative, Michael says, ”Peking duck”, Luciana likes “dumplings”, Evelyn offers “wontons” and so for my birthday supper six of us sit under the comfort of the brightly-lighted palapa feasting on all of the above plus an extraordinary dish called “salty Chinese chicken” and vegetable rice. The wine flows and the beer is cold. Happy Birthday to me.

I’ve been thinking about the “adventure” in my Belizean Adventure 2013 series, and mentioned this to Evelyn.

She said, “What’s your point?”

I said, “Well, looking back at it, we don’t seem very adventurous.”

“Depends what you mean by ‘adventurous’, doesn’t it?” she says, punctuating the italics like a stuffy English Major. “If you mean ‘adventurous’ as a thrillingly exciting moment, I would agree with you. But we’ve done all that. Snorkeled the famous Blue Hole, hiked here and there and everywhere, identified and visited every Mayan site  in Belize, wore coal-miners helmets to explore the pitch-black Barton Creek caves,  tubed down the Red Bank river, canoed the Sebun River with Mr. Brooks and you even swam in the crocodile infested Monkey  River, need I go on?”

“But if you mean ‘adventurous’ in the sense of  dealing with an experience out of the norm, like, for example, travelling in any third-world country for any length of time, I would say that every day is an adventure, wouldn’t you?”

And believe it or not I had nothing to say. 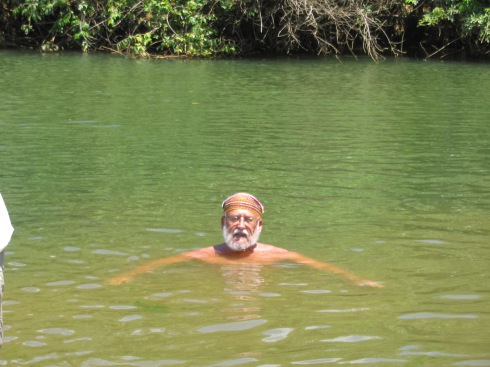 Swimming in the Monkey River

So what do we do next? We go to the Friday Jam at the Sportsmens Bar on Front Street, sit on the beach side and listen to a core group of five musicians + anyone else play old-time rock and roll and some hard driving rock that sounds like a freight train full of steel pounding the tracks on a down slope.

The Jam is an ex-pat extravaganza with a mixture of tourists, travellers, local Caye Caulkerans and Belizeans from around the country. If the band is like a freight train, the Cuban guitarist is the engineer careening around bends with abandon, the other musicians like freight cars racing behind him. Only the drummer can keep pace, flipping her sticks to the clickety clack of the train on the track.

The music is contagious and we dance as the sun sets. 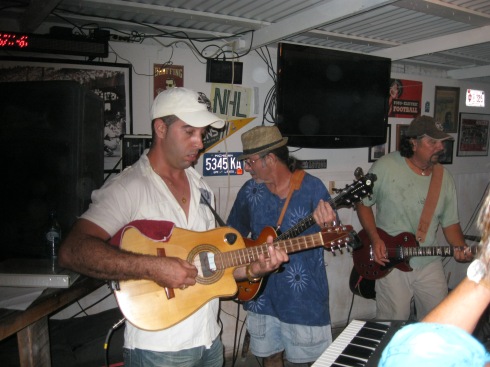 Jamming at the Sports Bar

We pretty much stick with our routine for the last week. We are both getting a lot done on our special pursuits.

Evelyn is crewel embroidering her second section of a museum project which when completed will consist of 20 sections sewn into a hooded coat, called a ‘soil’ coat because it depicts the creatures that live in the soil we trod on. Judging from what Evelyn has shown me, the finished coat is going to be a beauty.

I’ve been blogging of course but also writing more travel noir fiction which I hope will result in another book of Belizean Tales of Adventure being published. 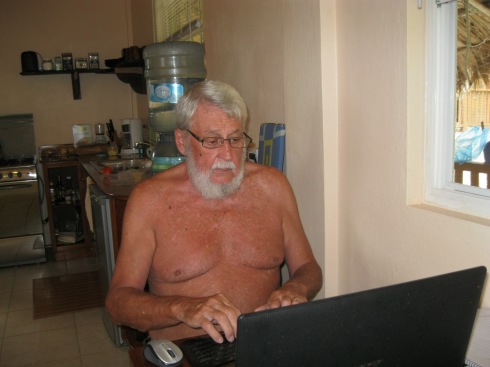 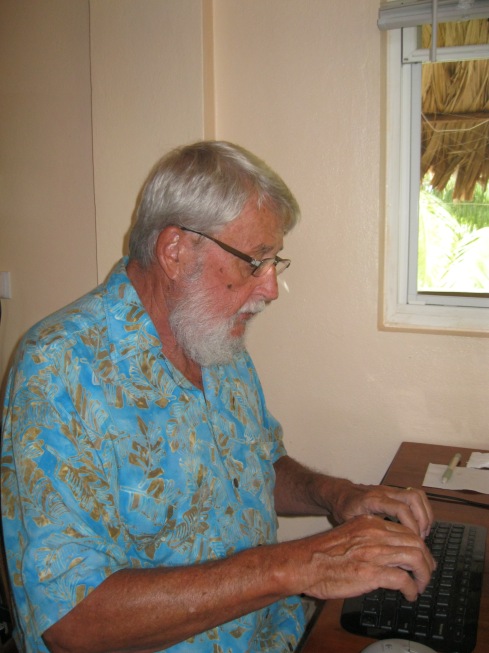 On Tuesday, I order a leg of lamb from Maria at my favourite shop, the Land and Sea. This is where I buy our sausages, pork chops, pork roasts, chickens, shrimp, lobster, conch and fish, mostly red snappers. Maria orders my lamb from a shop in Belize City and promises me delivery Saturday morning.

I pick up the leg of lamb at 10, pack it into my basket and bicycle back to our cabana where Evelyn has a marinade prepared. I sever the shank from the leg with a machete and we turn the leg in its marinade every 1/2 and hour for the next 6 hours.

Evelyn shops for zuccinis and egg plants, gets them ready for broiling, then prepares a Greek salad.

Michael and Luciana do their part though they are both also working. Michael prepares a dish of onions and potatoes which he will finish off on the grill. Luciana bakes three different loaves of bread. She will also offer appetizers she picked up in Belize City on Friday.

I’m working on the barbecue, making sure it’s ready when we are ready; then, Michael pierces the leg of lamb on the rotisserie rod and we tie it with kite string.

When everyone has arrived, we toast one another with sparkling wine and feast once again at the table under the palapa 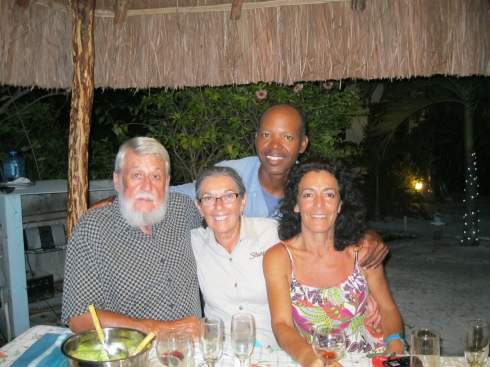 Last supper ’till next year

Sunday I turn left-over lamb into a remarkable lamb curry

Monday night after the March Madness Final, we sit together on the verandah overlooking the road that runs past the Oasi and toast each other. 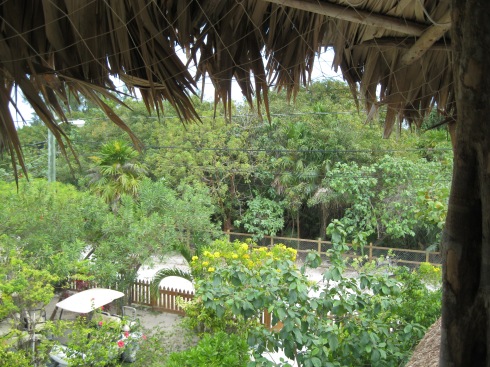 View from our veranda

Tuesday is departure day, April 9. We say farewell to our hosts, take the water taxi to the mainland, a taxi to the airport, Delta to Atlanta, Atlanta to Toronto where our friend Sandi welcomes us at the airport and then, early in the morning, home.

We have had a great Belize Adventure 2013 and have already made booking for next year.

But for now and the next 10 months, it is home sweet home.

I have vacationed in Belize for more than 13 years and have come to love this country. I have traveled up and down and all around, and have a lot of information that might help you on your travels. END_OF_DOCUMENT_TOKEN_TO_BE_REPLACED
This entry was posted on Tuesday, October 1st, 2013 at 12:17 pm and posted in adventure, Travel. You can follow any responses to this entry through the RSS 2.0 feed.
« Belizean Adventure 2013, Part 5, Edited with New Pictures
Caribbean Adventure #3, UPDATED FOR 2015, Placencia village continued – What to Do, Where to Eat »

One response to “Belizean Adventure 2013, Part 6 edited with new pictures”