HOW TO GET TO PLACENCIA FROM THE GOLDSON INTERNATIONAL AIRPORT

I’ve never flown from town to town in Belize because I have always had the time and the inclination to take the bus and make the bus part of my adventure. Times have changed, however, and the next time we visit Placencia it will be by one of the two in-house airlines, Tropic Air and Maya Island Air.

Tropic Air takes off first from the International Airport at 7.50 a.m. Maya Island leaves shortly afterwards at 8.10. Tropic Air’s last flight out is 16.30. Mayan Island’s is 17.00

Have your host arrange for a pick up at the Placencia Airport. It will be an additional charge so make sure you know what it is before signing on.

The sun will be getting ready to set by the time you arrive in Placencia Village if you take the last flight out of the International.

There are two alternatives. One, rent a car and drive from the International to Placencia on the Western Hgwy to Belmopan, the capital of Belize. Take the Hummingbird Hgwy to Dangriga but turn off before Dangriga to the Southern Hgwy. Watch for signage taking you off the Southern Hgwy to Placencia, then down the Peninsula to the Village where you will have to stop to avoid driving into the Sea. What with travelling on new roads in a foreign country, I would guess at 4 hours +.

I have never rented a car in Belize and likely never will. Check out car rentals in Belize.

The other alternative is travel by bus. I used to take a taxi from the Airport to Belize Citdy, stay a day or two in my favourite hotel, the Hotel Mopan on Regent Street, and take an early morning bus to Dangriga where I got on a bus to Placencia, probably about 4 hours if the connections were good.

Can’t do that no mo. Hotel Mopan closed its doors and I don’t want to stay in Belize City till the cops take the City back from the robbers.

See my blog at briansbelize.com for the Travel Advisory that I posted 2013/01/10. You could stay at one of the hotels identified there, north of the City and ask your host where to catch the bus to Belmopan. I’ve never done it that way and I’m getting too old to try.

PLACENCIA IS DEFINITELY WORTH THE TIME YOU WILL SAVE BY FLYING 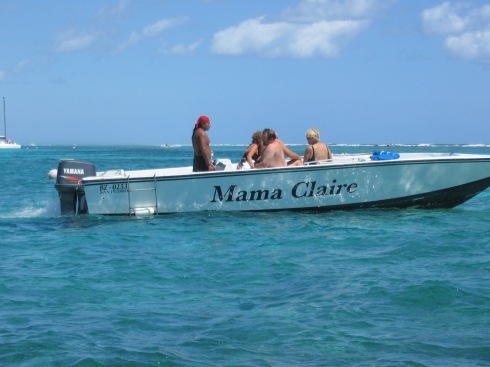 Apart from swimming and tanning and eating and drinking and shopping and walking around and exploring the Village,  you can sign up for scuba diving, snorkeling, fishing  or sailing. You can day-trip to Monkey River Village, a throwback to earlier times where you can tour the village, meet some of the locals, take a hike into the rain forest where you may encounter scat-throwing howler monkeys, or boat up the Monkey River for a refreshing swim once the crocs have been scared away.

We’ve snorkeled off Laughing Bird Caye, part sanctuary, part off-shore snorkeling. The boat trip to this Caye was fun and the lunch al fresco tasty, but the snorkeling was a disappointment because we had a lousy snorkel guide. You can’t do much about that except lodge a complaint when you get back to the Village. We’ve boated over to Independence, a small community on the mainland with a twin-town called Mango Creek. Many of the workers in the Village come from these twin-towns.

We went bird-watching to observe scarlet macaws in their natural habitat. After crossing the lagoon to Independence/Mango Creek, we squeezed into a van that took us inland to Red Bank, a small Mayan village. From there we hiked for about an hour along a river bank to a clearing from which vantage point we were supposed to see the scarlet macaws but we got there too late and there wasn’t a macaw to be seen! Too bad, but all was not lost. Our guides had brought along rubber inner-tubes and we tubed back down the river with the current, meeting the challenges of three rapids. Somewhat scary at times but exhilarating at same time. It was a trip that was deposited in the memory bank.

Picnic lunch on a deserted island? Wind surfing? Crewing on a catamaran? Check out the Tour shops in the Village and take your pick.

Placencia is a dreamy little Village and your spot on the shores of the Caribbean can be dreamy, too. Sun, sand and sea…a cold beer under a thatch roof…languid conversations…watching the moon glow in a clear night sky…watching the sun rise in a golden burst inthe early morning…go ahead, make your day…in Placencia.

I have vacationed in Belize for more than 13 years and have come to love this country. I have traveled up and down and all around, and have a lot of information that might help you on your travels. END_OF_DOCUMENT_TOKEN_TO_BE_REPLACED
This entry was posted on Friday, March 15th, 2013 at 11:30 am and tagged with Airport, Belize, DIrections, Placenia Village, travel and posted in adventure, Travel. You can follow any responses to this entry through the RSS 2.0 feed.
« Belize Adventure 2013 Part 3 Back on Caye Caulker
Belizean Adventure 2013, Part 4 »